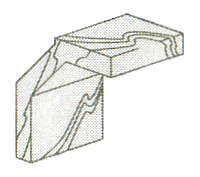 The armor's status as Experimental item ended at the close of the Jihad era. It would enter regular production and became a standard Inner Sphere Technology in 3080.[2]

Though the armor functions like standard armor against ballistic weapon attacks, it is very brittle. Whenever a 'Mech is physically attacked, falls, or crashes through a building, the armor is half as effective as standard or Ferro-Fibrous armor. This weakness has also been observed in artillery attacks.[1] In addition, Armor-Piercing autocannon ammunition, Tandem-Charge missiles, and BattleMech Tasers all have a better chance of penetrating the armor and causing critical damage.[1]

Like the Ferro-Fibrous armor it's based on, Laser Reflective Armor is bulkier than standard armor. In game terms it provides the standard protection per ton, and takes up ten critical slots on a 'Mech. The total damage taken by the armor from energy weapon attacks is halved, rounded down.

Laser Reflective Armor is manufactured on the following planets: