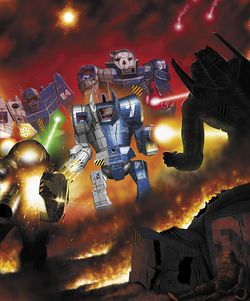 The Third Lyran Guards are advancing

Like the other regiments of the Guards during this era, the Third lacked any particular political ties - either regional or familial - unlike regiments in other brigades; commonly assigned to garrison postings, the Third Lyran Guards and their sister regiments were postings of choice for those who wanted to work for the Commonwealth without either regional loyalties or particular ambitions. This led to the Third and her sister regiments being manned by soldiers who were professional, but without the close-knit ties found in more parochial regiments. The LCAF was intent on generating more camaraderie and esprit de corps among the Third and the other Guards regiments, but with little success by 2765. The LCAF High Command was less than impressed with the Third's efforts to "bolster relations" with a Canopian pleasure circus in the 2760s, and rewarded the command with a posting to the Black Rock continent on Orkney, a notably desolate posting, whilst a special medical team and the LIC evaluated the repercussions and consequences of the Third's relationship-building "encounter".[1]

The Third unsuccessfully defended Tharkad and the wife of the late Archon Marcus Steiner against troops loyal to his younger brother Claudius Steiner in 2844.[3]

The Third invaded the planet Vega during the Fourth Succession War. Initially, the Guards all but crushed the resistance on-world and drove the defending Second and Fourteenth Legions of Vega from two of the world's three continents. However, when Theodore Kurita arrived in October 3028, the situation dramatically changed. Theodore managed to rally the Legions of Vega and launched an offensive that ultimately split the Guards in two. The Guards had to retreat from Vega or face annihilation by the superior numbers of the DCMS forces. The Beta company of the Guards' second battalion rearguarded the evacuation of the remaining Lyran forces.[4] During the final wave of attacks launched as a part of Operation GÖTTERDÄMMERUNG the Third attacked New Wessex.[5]

During the Ronin War the Third Lyran Guards were assigned to assist the Free Rasalhague Republic troops who were fighting mercenary units on Kandis. Their assistance wasn't required however, as Theodore Kurita sent the Shin Legion to Kandis as a test. The Legions quickly routed the mercenary troops.[6]

The Third was among the nascent AFFC invasion force dispatched to Vega during the War of 3039, an assignment the Third's members relished as they had grown obsessed with redeeming their previous defeat.[7]. During the ensuing campaign the Third assisted in the defeat of Vega's garrison and was then redeployed to Port Moseby before the DCMS counterattack.[8]

In 3044 the Third Lyran Guards and 11th Donegal Guards landed on Alphecca, a world lost to the Draconis Combine in the Fourth Succession War. The two Lyran units were able to destroy the planet's militia and inflict heavy losses on the 12th Sun Zhang Academy Cadre.[9]

During the Clan Invasion the Third Lyran and Eleventh Donegal Guards were stationed on Graceland. Their prior working relationship allowed them to defend the world against raids by Clan forces.[9]

Shortly before the fighting, the Third received several Fafnir BattleMechs for evaluation. They used these against Clan Jade Falcon forces, but still took some damage.[10] During the FedCom Civil War, the Third Lyran Guard tried to keep the peace between the 11th Donegal Guards and ComStar's 388th Division.[11] At the end of the war they were reassigned to Crimond.[12]

On 19 February 3068 the 7th Falcon Regulars from Clan Jade Falcon targeted the planet. They found the 3rd Lyran Guards ready to defend the planet. The Third Lyran Guard fell back when the Seventh Falcon Regulars attacked, only to encircle them in the foothills near the Tybalt Mountains. Star Colonel Colbert Icaza dispatched his Fourth Binary to secure a supply line as well as a line of retreat, only to find Leutnant General Paul Zardetto's command company blocking that path. The Guards inflicted heavy damage to the Clan forces, forcing most of the Falcons to retreat. Star Colonel Icaza had to sacrifice more troops to break out of the Lyran encirclement and leave the planet. The Guards were able to requisition replacements in exchange for most of the salvage they took.[13]

The Third participated in the liberation of Tharkad in January 3072. They dropped on-world and held open a landing zone for other Coalition forces.[14] The Third Guards were one of the Lyran units to join Devlin Stone's Coalition. As part of Group IV of the Free Worlds League task force, the 3rd Lyran Guards attacked Talitha in May 3077 alongside Beta Galaxy of Clan Wolf-in-Exile and the Marlette Crucis March Militia. Acting with support from the Clan Nova Cat Aegis-class WarShip CNC Blade, Group IV quickly achieved total air superiority on Talitha, allowing the Guards and the other Group IV ground forces to quickly roll over the Blakist defenders in a swift campaign.[15]

The first 18 months of Operation SCOUR were a bloody, brutal and demoralizing experience, and by the time the Third Lyran Guards and the other Group IV units had linked up with the bulk of the rest of the Free Worlds League task force on Pollux in June 3078 the Wolf's Beta Galaxy was the least damaged of the Group IV units... and yet could muster only a single Cluster, one third or less of its' initial strength.[16]

The Third Guards participated in the assault on Terra. There they were assigned to General Connor Sortek's command. Fighting alongside the 17th Benjamin Regulars, the Third seized the Pacific Northwest, a part of the North American continent.[17]

In 3079 the Third Guards were assigned to garrison Solaris and Rahne.[18] In 3085 they had moved to Port Moseby. the LCAF High Command apparently thought that the Third Guards would be able to defend the Commonwealth without starting any conflicts.[19] At that time they were only twenty percent below their nominal strength.[20]

Sometime after 3132 the Third Lyran Guards had several elements on Port Moseby. These troops faced a company of the Second Legion of Vega, including several new Dragon II designs. The updated Zeus BattleMechs were more than adequate for the challenge, and the Kuritan forces withdrew. The Third Guards were also present on Hesperus II, where they engaged Clan foes.[22]

During the reign of Archon Vedet Brewer, the Third Guards were ordered to retreat from the Clan Jade Falcon border. The Guards refused, instead defending Melissia. Their defense didn't go well, though, and the Falcons inflicted heavy losses on the Third and forcing them to withdraw. The Third fell back, moving to Chapultepec and then Kwangchowwang. The Clan offensives stalled around the time the Third reached Kwangchowwang, and the slowdown allowed the Third to rebuild. They were later redeployed to guard Adelaide and Mahone. After assuming this duty station, they used their armor and infantry forces to raid the warehouses on Melissia, depriving the Falcons of tons of equipment.[23] The Third was split between Adelaide and Mahone in 3145.[24]

The Third Lyran Guards trained hard for four years to reclaim Tharkad from Word of Blake forces. A large part of that training dealt with combat drops, and so the Third Lyrans are very skilled in dropping into combat.[29]

- At this point in time the Third were stationed on Orkney.[1]

Note: At this point in time the medium-weight unit was stationed on Orkney (LC). In 2821 the command was reduced to 45 percent of its strength and was deployed on Sulafat. [30]

Note: At this point in time the medium-weight unit was stationed on Sulafat with an operational readiness of 113 percent. [31]

Note: At this point in time the heavy-weight unit was stationed on Hesperus II with an operational readiness of 63 percent. [31]

Note: At this point in time the heavy-weight unit was stationed on Radostov. The unit was destroyed during the war.[30]

Note: At this point in time the command was stationed on Gan Singh. [33]

Note: At this point in time the command was stationed on Cimeron. [34]

Note: At this point in time the command was stationed on Graceland. [35]

- The 18th Lyran Commando has a battle armor Company, including a Squad of Elemental battlesuits