Taurus is the political and cultural capital of the Taurian Concordat. The planet is named for the second husband of Samantha Calderon, Victor Taurens, who died while attempting to navigate the system's asteroid field. Taurus is also one of the industrial centers of the Concordat; thus, units stationed on Taurus tend to be elite and well-equipped. Taurus is also home to one of the largest periphery populations, estimated at greater than two billion inhabitants as of the early 31st century.

Transit in-system is difficult. The Taurus system is cluttered with a natural barrier of asteroids, which have been mined and laced with Taurian Special Asteroid Support Force laser and missile batteries. 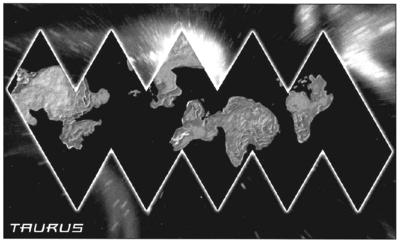 The first colony on Taurus was established on the 23rd of January 2253 by an expedition of colonists led by Samantha Calderon. A native of the world of Aix-la-Chapelle, Samantha had lost a husband and two daughters in the Outer Reaches Rebellion; this left her initially with access to considerable wealth from her husband's business ventures, only to then see half that wealth drained away in the aftermath of the Rebellion or at the hands of privateers from the Republic of Marik.[54] Believing that a radical solution was needed, Samantha converted her wealth into ships and supplies and lead an expedition of more than 2,300 people aboard 25 FTL capable ships to find a new, safe home. It took the expedition 22 months to travel from Aix-la-Chapelle to the unexplored Hyades Cluster; despite losing two Aquilla-class transports in the attempt, the expedition became the first explorers to successfully navigate through the dust, gas and asteroid fields that surrounded the cluster to discover the eight linked star systems within the cluster and the 37 assorted planetary bodies orbiting or being pulled between the various stars.[2]

Samantha named the first world settled Taurus in memory of her second husband, Victor Taurens, who had died during the attempts to penetrate the Hyades asteroid field. Taurus proved to be a world rich in resources, and for the next 15 years the colony grew inside the safety and obscurity offered by the cluster, until the death of Samantha in a freak accident on the 14th of March 2268.[2] Samantha's son Timothy was selected as Samantha's successor and Protector of the Taurian Homeworlds. Avoiding the democratic processes that were the signature of the despised Terran Alliance responsible for the colonists leaving the Inner Sphere, Timothy established a hereditary form of leadership on Taurus and armed with the sweeping powers granted to him proceeded to establish an orderly culture based on the simple and egalitarian principle that those who didn't contribute to the general welfare would in turn be denied access to that general welfare. Summed up as "no work, no food", this simple but effective system gave the Taurians the impetus needed to survive and prosper, with groups of geologists, scientists and settlers from Taurus colonizing five additional worlds within the Hyades Cluster between 2310 and 2320.[3]

The nation born on Taurus was known variously as the Taurian Homeworlds[3] and the Calderon Protectorate.[55]

Fall of the Star League[edit]

During the final years of the Star League, the Taurus system served as the official homeport of the 11th Fleet (SLDF). However, as the Taurian naval construction yards were scuttled during the Reunification War and the Periphery nations were not allowed to build WarShips afterwards, spacedocks large enough to repair and maintain warships were not available to service the fleet. Thus the appropriated naval facilities in the Illiushin system served as the 11th Fleet's primary repair and refit facility.[56]

Officially, to help remind the people of Taurus of the might of the Star League, several warships, including battleships, were in orbit over the Taurian capital of Samantha. Unofficially, the reason the warships were kept in orbit continuously was for security reasons as the warships were vulnerable while docked.[57]

Meanwhile, on the ground, the 19th Army (Star League) of the Star League Defense Force was headquartered on Taurus. The commanders of the 19th Army meet weekly with the Protector and representatives of the Taurian military to maintain an open line of communication with the leaders of the Concordat. Despite the many years since the Reunification War, the Taurian people still resented the SLDF presence and violent incidents were not uncommon.[58]

The XLVI Corps (Star League), part of the 19th Army, served as the primary garrison for Taurus and the nearby worlds. They too were also headquartered on Taurus.[59]

On the 1st of May 3074 several asteroids struck Taurus, killing Protector Grover Shraplen and destroying the capital city, Samantha. Evidence recovered from the Taurian asteroid field and the remains of the asteroids that struck Taurus implicate espionage on the part of the Federated Suns, a charge vehemently denied by House Davion.[60][61] Later intel points to the Word of Blake weaponized yardship Erinyes (WarShip) as the likely culprit for Taurus' destruction.[62]

Emissaries from the Calderon Protectorate arrived on both Taurus and New Avalon on the 15th of March 3080, appealing to both states for an end to the conflict between the Concordat and the Suns. The Protectorate successfully brokered a treaty between the two states on the 2nd of July, a week after Baron Cham Kithrong stepped down as Regent-Protector so that Erik Martens-Calderon could assume the Protectorship. The treaty called for the Federated Suns to cede the Pleiades worlds to the Concordat, while the Concordat effectively surrendered the Quixote-class TCS Vendetta to the Calderon Protectorate, where it would be crewed by a crew of personnel from all three realms. While the treaty ended the war, the Vendetta wouldn't be formally ceded to the Protectorate until the 19th of April 3081.[63]