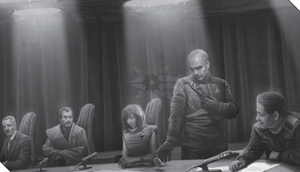 Within the week General DeChavillier had informed Kerensky that the SLDF stood ready to help him overthrow the High Council and assume the title of First Lord. Kerensky's response was that he was too tired for treason and would remain loyal to the Star League until the very end. After ten months of exhausting and furious debate though it soon became apparent that the High Council was at an impasse. On 12 August 2781 they released a curt statement detailing their inability to come to a decision and that the Star League would be dissolved.[2]

Kerensky made his decision to implement Operation EXODUS around the time of the Ninety-first's defection and preparations began immediately. The General would confide his intentions to Jerome Blake at the opening of the Hilton Head HPG complex that same year, and while angered and confused by his decision the Minister of Communications agreed to suppress any knowledge of the EXODUS plan from the Great Houses. On 14 February, 2784, in a meeting at an empty wooden warehouse on Terra, Kerensky and the rest of the High Command outlined their intentions to over two hundred high-ranking officers, that the heart and soul of the Star League still lived on inside each soldier and that the only way to preserve it was for them to escape the coming storm. While Kerensky's speech drew standing ovations, a small group disapproved, refusing to abandon the Terran Hegemony and the Inner Sphere. Kerensky responded by instituting a poll in late February of every remaining member of the SLDF and giving them the option to join the mission or stay behind.[2][3] [4] [5] [6]

In the end over eighty percent of the force decided to go, while a number of units either joined the houses directly or as mercenaries. The bulk of those who refused began to coalesce around the 151st Royal BattleMech Division and its outspoken CO Lauren Hayes.

Concerned at leaving Hayes and her sizable SLDF forces without direction and recalling Jerome Blake's pleas for assistance in the reconstruction of the Hegemony, Kerensky brokered a deal whereby Hayes could remain but had to obey Blake and the Ministry of Communications as the last vestige of the Star League, hidden from the Great Houses. [2] [3] [4] [5] [6] 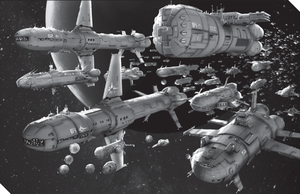 On 8 July General Kerensky gave his famous order - "Exodus" - and the huge force assembled at New Earth and fifty other star systems made the jump. The ships made a beeline for the Draconis Combine, stopping only in star systems with sizable SLDF bases to strip them of supplies and cryptically replying when asked as to their mission that they were "out on extended maneuvers." Along the way the convoys also picked up civilians, many having suffered greatly during the civil war and disposed to leave everything behind, while others were "invited" to join for their skill set. Records kept by the Clans would later hint some may have been less-than-willing participants.[7][8]

Despite its diminished size the SLDF was still vastly stronger than any of the Houses' forces and all feared that these mysterious maneuvers were part of a new campaign of revenge and conquest. Coordinator Kurita became especially perturbed when the convoys' routes became clear, knowing full well how he had mistreated Kerensky and been friendly with Stefan Amaris during the civil war. Harboring suspicions that the SLDF was planning on leaving the Inner Sphere and knowing something of the General's mindset, he knew it was better to remain calm than to panic and ordered his forces to not attack. As the SLDF passed peacefully through Combine space his convictions were proved correct, and the convoys began to assemble at their rendezvous point above New Samarkand on 2 October, with the entire force assembled ten days after.[7]

A pair of SLDF bases were located on the planet, each with extensive wilderness surrounding them. For the next three weeks the members of the fleet were shuttled back and forth from their ships to the planet to rest for the coming journey, their campfires dotting the landscape as they prepared for the ordeal ahead. It was also during this time that Kerensky fulfilled his last duty as Protector and delivered the body of Amaris to the University of New Samarkand's medical school. Finally on 5 November the Exodus fleet began to leave the system, its sheer size requiring a full day for every ship to leave (with the last being the flagship McKenna's Pride). Making its way through the Periphery, its last confirmed sighting would be in orbit above Gutara V before disappearing from the Inner Sphere forever.[7] [9] [6]

The fleet made slow progress as it moved out from the Periphery and into deep space. Picket ships scouted ahead of the main fleet, looking for worlds from which to resupply, while WarShips and scout JumpShips operated in the vanguard, flanks and rearguard. Several ships would be lost due to mechanical failure and jump accidents or simply disappeared during this time (including an advanced prototype, the SLS Manassas, separated from the fleet to scout for possible pursuers, though the ship wasn't destroyed[10]), while rationing was a daily part of life. People accepted these hardships at first in the belief that Kerensky was leading them to a better life, but as the months dragged on tensions began to develop among the crews and families.[11] The fleet stopped at several planets to resupply water and maybe also food (ComStar later discovered one of these planets, codenamed Barbados).

This dissension finally came to a head on 19 August 2785 when a task group led by the WarShip Prinz Eugen mutinied and threatened to return to the Inner Sphere. Kerensky dealt with the situation in a decisive if brutal manner, but rumors that the fleet was simply aimlessly wandering through deep space continued to spread. In response the General issued General Order 137 in an attempt to justify his actions and boost morale among the people. The explanation had the desired effect and did much to return a sense of normality to the fleet, but Kerensky was well aware their journey would have to end soon.[11]

It is not known whether General Kerensky had a particular destination in mind, or whether outside factors forced him to cut the journey short or extend it longer than planned. By July of 2786 tensions were again rising to dangerous levels, such that Aleksandr's son Nicholas believed another mutiny was likely soon. On 24 August when the fleet reached a cluster of five habitable worlds - the Pentagon Cluster - Kerensky announced that the fleet had come to the end of their journey. Though the Clans would celebrate that day as Founding Day, the actual planetfalls wouldn't occur until early September as the SLDF science corps surveyed the worlds. Within ten days the first of the engineering corps began setting up prefabricated buildings, and within a week the first colonists set foot on Pentagon soil. The Exodus was over.[11][8]

Kerensky feared some Inner Sphere states would attempt to follow the Exodus Fleet to try to recruit more of their units to fight for the House Lords; he was right. Fearing his return, and the hanging threat the SLDF may pose, all five Successor Lords diverted resources to heavy research about their fate, and some even tapped into independent operation of private exploration groups to search them but, in the end, only Houses Davion and Kurita launched great expeditions to search them. The first and most desperate was the Church Expedition, which followed them to the Gutara system, before losing track. The Federated Suns and the Combine each launched two more expeditions over the next century. Nothing was found; Kerensky's efforts to cover their tracks proved successful.[12]

The forteen percent of the SLDF who stay in the Inner Sphere and didn't join to ComStar, joined the Great Houses or turned mercenary. The bulk of these troops were the Eridani Light Horse, 15th Dracon Regiment, Blue Star Irregulars, Screaming Eagles, Bolton's Rangers, 802 Independent Aerospace and the 4th Tau Ceti Rangers.

The Black Warriors—a Star League-turned-merc unit—was left behind accidentally, due a communication error. They eventually turned to piracy.[13]

Another unit left behind (due to mechanical problems) was the 295th BattleMech Division. They attempted, in vain, to follow the Exodus Fleet; eventually they self-stranded on an uninhabited Buffalo Meadows, dying off within a few decades.[14][15]

At the end of the civil war only 113 Divisions of the SLDF remained.[4] Of these units over a hundred agreed to follow Kerensky: thirty-two BattleMech divisions, seventy-six infantry divisions, and sixty-three independent regiments. A total of nearly six million personnel, a third of which were soldiers and the rest civilians, were carried in 1,349 JumpShips, 402 WarShips and over 5,000 DropShips.[7][11]