This article is about the BattleTech era. For an explanation of the concept, see ilClan.

In 3150, the Republic of the Sphere was crumbling inside of the Fortress Republic after various infighting between the Inner Sphere, Clan, and Republic splinter factions, both within and out the Republic. In 3151, Clans Wolf and Jade Falcon would take this opportunity and make a race towards Terra to restore the Star League. After an intense battle between the Republic, Jade Falcons and Wolves, Clan Wolf would emerge as the ilClan and reestablish the Star League with a Clan-based styling.

Fall of The Republic[edit]

Devlin's attack would seal the fate of the once mighty Republic.

During the attack on Terra, the Republic was feeling the pressure of both Clan Wolf and Clan Jade Falcon. The Exarch, Devlin Stone would hear out Damien Redburn's contingency plan to destroy leadership in both Clans. At first, Stone was reluctant to allow the plan to happen, however the intense impact he felt in fighting the Clans on both fronts forced his hand. Pleased to hear the plan would go through, Damien would personally see this plan come to fruition. He would form a headhunting false-flag group to fool both the Wolves and the Jade Falcons into fighting each other while Damien's group would assassinate the two leaders in the confusion. Unfortunately Redburn's plan backfired, as he made an attack on Wolf Khan Alaric, he killed the wrong target and as the Wolves saw this deception they opened fire, killing Damien in the process. This would only anger the Wolf Khan further as the Republic were feeling the pressure.[1]

After succumbing to the attacks of both Clans, Devlin Stone would contact Alaric Ward for a ceasefire. The Wolf Khan, angered by the attack, stated that he would refuse the proposal unless he brings Jade Falcon Khan, Malvina Hazen into the offer. To his dismay, the soon-to-be former Exarch would comply with the demand, and the three would meet to discuss the terms of surrender. Devlin Stone would offer all assets to the Wolves and Falcons to appease them, but both Khans refused that proposal. Instead, Alaric would make his own proposal to dismantle the Republic permanently, having already been angered by the failed assassination attempt. Although Stone reluctantly agreed, he attempted to offer himself to the Wolves as compensation, but Ward would reject the offer and have him make the announcement to disband the Republic of the Sphere immediately.[2] 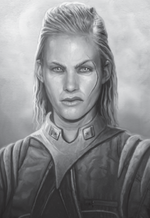 In 3151, with the Republic of the Sphere disbanded, Alaric would propose one final trial to his rival, the ilClan Trial. This trial would not only allow the victor to have the mantle of First Lord of the Reborn Star League, but it would also allow them to become the ilKhan and their Clan to become the ilClan of Terra. The trial was announced to take part in the region of Canada. Before the trial began, both Clans would hold a ceremony for the occasion.

There, both Clans would unleash everything they had on each other from allies to their sheer determination in an attempt to gain the coveted titles. Clan Wolf would call in reinforcements for their allies Wolf's Dragoons and Clan Wolf-in-Exile. As the Wolf Clan's allies were getting close to defeating the Jade Falcon Clan, the Dragoons were ordered to retreat. The turning point for the Wolves would come when the Falcon leader Malvina, was defeated by Anastasia Kerensky's Savage Wolf, thus ending the battle. 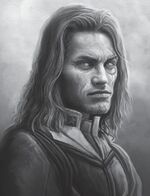 After the battle of Terra, Alaric would mark his claims as the new ilKhan and First Lord of the Reborn Star League. He would hold media coverage to have an event to show people around the inner sphere all of his accomplishments. One of them even involved laying the Great Father's body to rest. He would even wear a dress uniform based on the League. ilKhan Ward would also work on settling matters with allies and enemies who were a part of the Trial of Terra, such as giving them BloodRibbons for their participation and angering Wolf's Dragoons. Alaric would even witness the death of the Former Republic leader Devlin Stone after hearing his manipulations and deceit.[3]

The death of Malvina Hazen would leave a leadership void that needed to be filled quickly for the Jade Falcons. This would quickly be fufilled by nominating Stephanie Chistu as Khan due to her honorable conduct among the Clan. She would focus on working hard to redeem the honor her predecessor had tainted. Because of the severe losses that the Falcon Clan had suffered both due to the intense trial and the Horses' attack on their worlds, the Jade Falcons would be reconstituted as a bodyguard Clan similar to the Black Watch.[4] 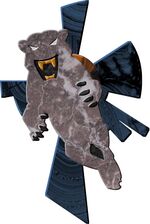 After the defeat of Clan Jade Falcon, Clan Smoke Jaguar would be restored as a provisional nonvoting Clan. As a part of Clan tradition, they would fill in the positions of Jaguar leadership for both a Khan and saKhan in a Trial of Position. With the leadership positions filled, they would become a special forces Clan bound to the ilKhan.[5]